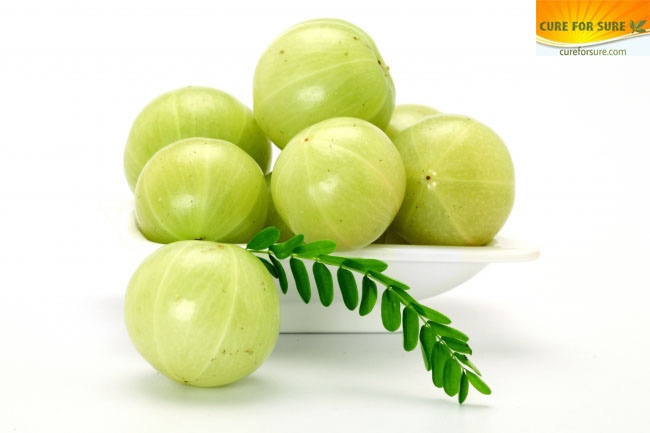 Amla (Phyllanthus Emblica or Indian Gooseberry) is native to India and grows in tropical and subtropical conditions. Thus, it has been extensively used in many parts of India as traditional medicine or for its nutrients. Regionally, amla is known by various names as Amalaki, Dhatri, or Amrutphala. In Ayurveda, amla has been described as peculiar green plum-like fruit that has all six tastes (except saltiness). It has been referred for a host of health benefits that involve improving digestive health to relieving cough in respiratory diseases.

Amla is considered to be one of the highest resources of vitamin C in the plant kingdom. According to previous research findings, an average quality of Indian gooseberry, weighing about 100 grams, may contain up to 600 mg of vitamin C. Thus, single amla fruit is known to be equivalent to one or two oranges for its vitamin C. Remarkably, though vitamin C is sensitive to heat, nutrients of amla have been shown to be preserved even on heating.

Amla is the most remarkable source for antioxidants. It has been reported to prevent ageing and enhance cell survival due to its rich antioxidant contents that promote detoxification and prevent cells from damage induced by free radical ions. Additionally, amla is known to support hair growth and prevent premature greying of hair. Vitamin C deficiency in the diet causes human scurvy, which is diagnosed by symptoms such as weakness, anaemia, and skin-related problems. Amla has been observed to be a promising herbal drug in treating scurvy.

Though the predominant taste of amla is ‘sour’, it has been referred in Ayurveda to stimulate the digestive fire without aggravating pitta. It fuels the digestive and gastric juices, which help in improving digestion capability. As a fruit itself, the fibre content of amla eases the digestion process and is especially supportive during summer when heat tends to accumulate in the body (specifically for those diagnosed with the pitta-predominant constitution).

Amla has carotene, which has been shown to strengthen vision. Thus, Ayurveda has designated amla as ‘chakshushya’, which means beneficial for eyes. The Indian traditional medicine has attributed amla to have the following properties:

Amla balances Vata, pitta, and Kapha. It pacifies Vata due to its sour taste, pitta due to its sweet and cold nature, and Kapha due to its dryness and astringent properties. It is especially calming to pitta predominant individuals.

Amla rejuvenates all tissues of the body and builds Ojas, the essence of immunity and youthfulness.

Amla is considered to be nutritive for the heart as it acts as a hypolipidemic agent, which reduces the risk of cardiovascular disease.

Amla also acts as an anti-hyperglycemic agent, which has been shown to support regulating diabetes mellitus (madhumeha).

Overall, amla is considered to influence hepatic, cardiac, renal, and neuroprotective effects. Moreover, amla is known to have additional properties such as antioxidant, anti-inflammatory, analgesic, antipyretic, and restorative. These properties are efficacious in the prevention and treatment of various diseases.

As per Charak Samhita, amla juice should be consumed on a daily basis as it harmonizes with the internal system.

Triphala, Chawanprash, and Brahmarasayan are the classical ayurvedic medicines that have Amla as the main active constituent. The presence of amla in these compositions results in a decreased free radical production and higher antioxidant levels.

For hiccup and for painful respiration: Amla juice or extract combined with honey and pippali (Piper longum) is suggested.

It is useful for Cough, Bronchitis, and Asthma.

Drinking amla juice with honey every morning can give you blemish-free, healthy, and glowing skin.

Amla is believed to smoothen hair by applying its oil or by adding its powder into henna (mehndi).

An excessive or incorrect dosage of Amla could cause your blood sugar levels to dip suddenly. This can be potentially dangerous for someone who already has sugar regulation problems as a result of diabetes. In the case of diabetes and hypoglycemia, it is recommended you consult your healthcare practitioner before consuming Amla.

Amla should be avoided in cases of high ama (toxicity) or when Kapha is especially aggravated.

As amla is is a natural coolant, it can worsen the problem with a sore throat in some patients.

It is difficult to make such a statement but amla has rejuvenation and immune-boosting properties. So, it can be said that taking amla regularly can help with immunity.